All you need to know about the happenings of TrueWoW can be found here.
Post Reply
12 posts • Page 1 of 1

Announcing the latest iteration of the armory. Better looking, more useful, and stealing even more graphical assets from Etro's themes! (I stole his triangles this time). So far, most important pages have been re-written from the ground-up using a new HTML platform. Therefore, I decided to make a pretty post about this pretty new armory, using all the snazzy things I can muster like those super-slick fades into transparency that people do to indicate that there's normally more below what was imaged, and some really boss chroma-keying. BEHOLD:

Character pages now boast higher-resolution character renders, improved tooltips, and an improved layout. Personally, I now enjoy staring into my gnome's eyes in what I can only describe as super-ultra-HD*
* Probably not truly HD to be honest.

Item, npc, achievement, quest and spell pages now feature far slicker layouts, utilising a new tabbed arrangement for each data section, reducing clutter and streamlining the pages. They also now have this dead mint fade thing that they do, which I like to spam when I get a bit sad.

Item pages now feature a full-width render box with the Legerdemain Lounge in Dalaran providing backdrop. I chose it because they serve a wide variety of beverages to suit all tastes.

NPC pages of raid bosses now provide a sleeker and more visually appealing raid information box, complete with raid depedent splash image. I just really like bright colours, so getting an excuse to introduce more to a page without making it too tacky is almost as euphoric as that first cup of tea in the morning, or that first strongly alcoholic drink to fill the void in your heart that grew during a period of unrelenting sobriety... almost.

Search fields have been added to several pages, with more to come still, allowing for individual entities to be easily found within a page or section. For example, I often type the word "quiche" into every search field I come across, to see what comes up.

Additionally, page selectors have been upgraded, generally looking neater and now allowing you to jump to specific pages by clicking on their central sections, and my god don't they look proper dazzling. 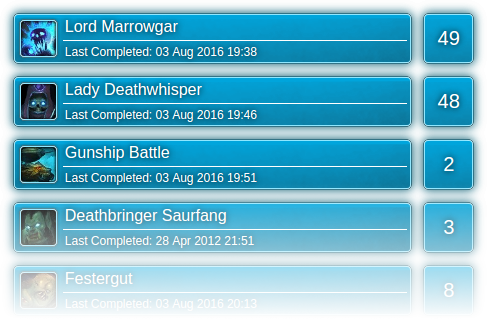 Yeah, you're reading that right... last time I did DBS on Nuko was 2012. Deal with it newbies. Raid progress pages now not only detail how many recorded encounter completions a character has, but also the last time they completed each encounter. Let the larger-than-average NPC murder based stalking begin! 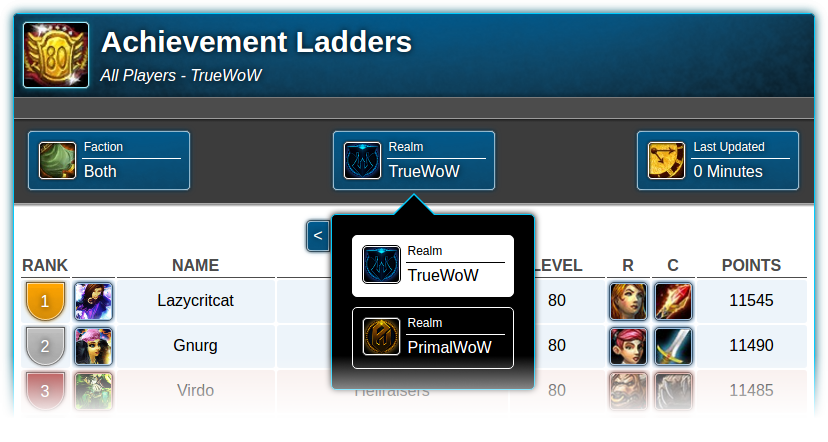 Ladder pages have been reworked to provide a smoother experience, allowing for switching between realms and categories without reloading the page.

In addition, they are the first pages to see the introduction of the new option selectors, which I just think look pretty wizard if I do say so myself.


BUT WAIT, THERE'S MORE!
The revamp continues, expect to see more page reworks in the near future, along with some under-the-hood changes, improving accuracy, usefulness and speed. .
.
Thanks for reading, stay safe, keep button mashing and remember the eternal words of wisdom:
.
.
"BOW DOWN BEFORE THE GOD OF DEATH."
.
.
Oops, sorry, finger slipped, obviously I meant:
.
.
"Gold Plz."
.
.
Cheery-bye!
Nuko - In the event of malfunction, please insert tea.
"In the beginning the Universe was created. This has made a lot of people very angry and been widely regarded as a bad move."
Top

Nuko! Everything looks amazing! Thank you so much for the beautiful and user-friendly armory updates!

Also, I very much approve of your location for your backdrop picture. Dalaran's businesses are to be seen and enjoyed by everyone!
In an unkind world, we must take it upon ourselves to be kind.

Thumbs up from me
Top

New to the server, where to send gold to??
Aka Funkelstein
Top

Amazing, you the real Tuko!
.

Good thing server is working smooth and properly so we can focus on making a new display for armory! Priorities.

Saltiness aside. It looks really good and you did an amazing job!

If only you were aware that Nuko's major focus was always armory... Not every gm and developer has same field of expertise. For example website designer or someone who is responsible for PR won't fix core related bugs on server because that's not he is good at etc.
There is nothing more difficult to take in hand, more perilous to conduct, or more uncertain in its success, than to take the lead in the introduction of a new order of things.
~Niccolo Machiavelli
Top

Thanks for the kind words everyone! This has been a few months in the making, so I'm quite proud of how it's turned out so far. *sheds a proud tear in PHP*

You're absoltely right. There's some weird bug with the "statistics" counters in the core (ie the ones that give you the numbers on the statistics tab of your achievements panel in-game) where it seems to record a kill in all modes for some encounters. The armory has its own slightly hacky way of recording encounter completions for those that don't have such a counter (ie most things before WoTLK), so I could make it use that for all the WoTLK bosses too. It's just a bit less accurate since it only started recording about the time that PrimalWoW was launched. ANYWAY, just so you know there's a thread for armory bugs and suggestions viewtopic.php?f=50&t=9263.

[Ionic compounds] aside. It looks really good and you did an amazing job!

Aaah, you see... I came here to drink tea and edit files with a ".php" extension. And I never run out of tea, so I multitask. However, thank you for your words of support at the end there! I am glad you like it.

In all seriousness, I would like to help out with the core, and occassionally I do on relatively skin-deep problems. However, as Almsivi pointed out, it's not where my expertise lie, and I don't have huge amounts of free time. It'd require me to do a LOT of backround on how trinity core is structured and all their standards before I could even touch much of anything that runs deeper in the code than making a boss say a text line when it dies. However, being a part of the staff and development team here, I can tell you those who know what they're doing are working flat-out to try and deliver to you the best experience they can.
Nuko - In the event of malfunction, please insert tea.
"In the beginning the Universe was created. This has made a lot of people very angry and been widely regarded as a bad move."
Top

Users browsing this forum: No registered users and 15 guests