Promote, share and read about the multitude of (in-game and out-of-game) events and creations of the community.
Post Reply
1008 posts

Hey Dymond, but I have not passed level 10 I am at level 10 right now. Thank you.
Top

I am sure that rule means that you can not reach level 10. Anyways, there is nothing I can do, we will modify the rules to make sure this is clear.
"Grief is the price we pay for love."
Top

Apologies for being my usual nagging self.... I was minding my own business in Dragonblight with my level 74 paladin, smiting the evil which is undead from the world, Suddenly, an 80 foot tree snuck up on me and took offense to my righteousness. Normally I would have slain him for such an affront, but I decided that it would be better to return to Dalaran and warn my brothers of this monstrosity.

Translation: What the hell? (WHAM WHAM) ouch lost half my HP, bubble hearth!

I hearthed with about 50% from Dragonblight, but when I arrived in Dalaran, the mob reached out and got a few more shots in on me and killed me

Here's a couple of photos, showing my corpse in the Dalaran inn and showing it was a Dragonblight mob that got me.

Hoping I can get the death restored... so close yet so far...

Death cleared for player Metalclad successfully.
"Grief is the price we pay for love."
Top

Pulled three while in Dragonblight, and decided to hearth at about 25% hp. Arrived in Dalaran, and it looks like they continued to attack me while I was traveling, as I ended up dead when I arrived. Twice in three days, after none in like three months. Urgh!

Pulled three while in Dragonblight, and decided to hearth at about 25% hp. Arrived in Dalaran, and it looks like they continued to attack me while I was traveling, as I ended up dead when I arrived. Twice in three days, after none in like three months. Urgh!

can you tell more details? i seen scenarios where players even on 5% used bubble and they ported out, for example very recently one player with bubble teleported out in onyxia (phase 3) without issues. I tried to reproduce but also non successfuly

EDIT: to avoid further non sence, i'm improving logs for ironman event
A son asked his father (a programmer) why the sun rises in the east, and sets in the west. His response? It works, don’t touch!
Top

For this particular encounter?

I pulled what I thought was one, ended up being three. I thought I might win, but decided at about 1/3 hp that it probably was better to retreat (two were archers, one was a shaman, so was going to take forever to kill them, if I even managed), so I bubble hearthed.

I assume they continued to attack me as my hearthstone was being cast (I could see the animations of them throwing the spear at me), but I took no damage as divine shield was up. The zone loading screen then popped up, and when it did, I still had about 25 % or 1/3 hp (so... about 1500? I think I have about 5600 hp).

I arrived in Dalaran standing, then instantly fell to the ground dead. My only guess is that while the loading screen is up, they were able to attack and damage me? Looking at the screen shot, I see where one hit me for 221 damage... at that rate, I'd have needed like 7 hits to kill me.

I've probably bubble-hearthed 10-15 times in the recent past, without issue prior to the tree two days ago. Being in the level 70s of Ironman, I'm more cautious at this point. I've gotten into the habit now of actually popping gift of the Naaru first, BEFORE bubbling. That way, during the hearthstone cast and the loading screen, i continue to regen hp. I rarely need Naaru any more so it's pretty much always up. I've never died on arrival, if I've Naaru-ed first, because after 4-5 ticks, I'm usually back to close to full hp. The only times I don't do it is (a) if it's a HOLY CRAP mob, like the elite that came out of nowhere two days ago and I needed to OMG get out... now!, or (b) if I'm not particularly concerned they'll kill me.

In this case, I never for a moment thought they'd do enough damage to kill me while hearthing. They were three level 72 mobs, I was level 74 and I was at what I thought was decent-ish health.

I have noticed, on many occasions, that if I've bubble hearthed, even if I don't die, I show up with a dent in my HP.

If it helps, I can find a mob, attack it, and then bubble hearth at full HP... taking a screenshot as it's casting (to show at full hp) and immediately take a screen shot on arrival (to show lower hp).

Any thing else I can tell you, about this event or them in general? Ask away!
Top

So, here's a before / after photo that I just did.... I aggroed a bear, healed myself to full so it'd be clear I was uninjured, then bubble hearthed. Photo one you can see that I'm at full hp (5603 out of 5603), and my hearthstone cast is almost complete. You can see it attacking me, and the "immune" message,

It's a fairly rare bug I suspect (how many paladins besides me bubble hearth on a regular basis?), and I don't particularly mind dying to it, so long as it isn't held against me

It's a fairly rare bug I suspect (how many paladins besides me bubble hearth on a regular basis?), and I don't particularly mind dying to it, so long as it isn't held against me

I managed to find source of this, seems another old code related to teleport unit spell effects... this issue will get patched at today's update
A son asked his father (a programmer) why the sun rises in the east, and sets in the west. His response? It works, don’t touch!
Top

Live again and hopefully no more bubble hearth deaths.
"Grief is the price we pay for love."
Top

I just wanted to give you a heads up, while I certainly appreciate the effort, I think the bubble-hearth bug might still be a thing. I did a test run this evening (wisely against a low level mob), and I'm still taking damage.

I'm not complaining; just, worst case scenario (which I will try to avoid!), if I die again after hearthing, I don't want it to be a complete surprise when I post here.

I'm going to open a ticket on the bugtracker, but mark it low priority because I don't think it really affects anyone but me.

Death for no reason!

Was about to attack these mobs and BOOM I was dead???

Please don't make me go through this again ... 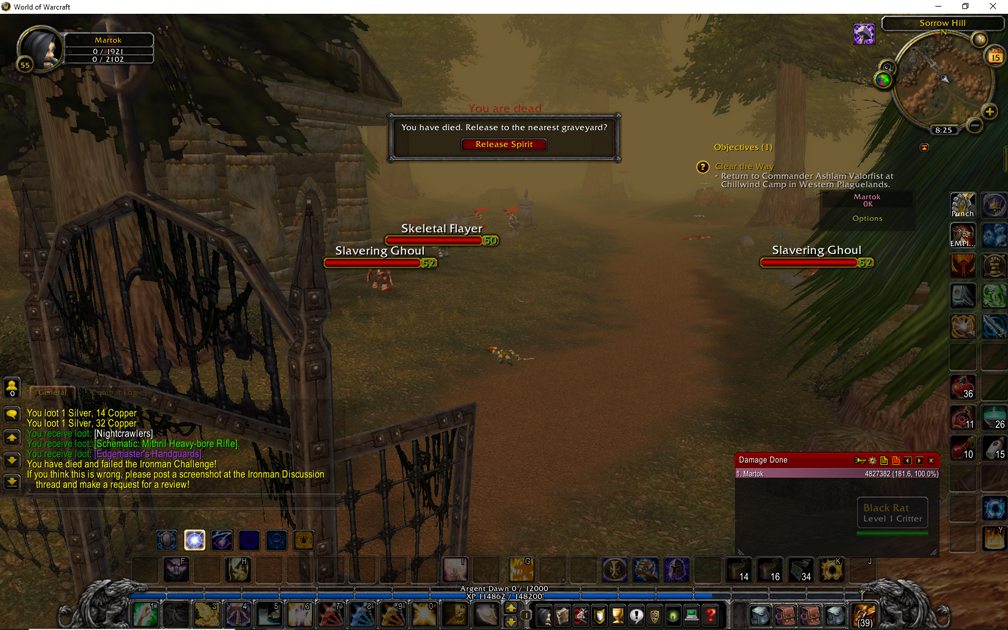 Need more information. Combat log, location, any additional information that supports your claim.
"Grief is the price we pay for love."
Top

I wish I could give you more - the combat log says I was slain by a Slavering Ghoul but they didn't appear until I was dead. I was standing right there, that location of Sorrow Hill, and suddenly I was dead and the mobs were running away from me. I'm pretty sure I just had a big lag spike.
Top

Without combat log with timestamps enabled, I am afraid there is nothing I can do.
"Grief is the price we pay for love."
Top
Post Reply
1008 posts