Blood is a highly competitive DPS spec, amazing on movement as well as on tank'n'spank fights.

Since Dancing Rune Weapon fix, Blood as a DPS spec got really popular.
That naturally triggers a lot of questions regarding itemization and on what rolls/DKPs should be "wasted" on.
Because I have already been doing simulations for Blood, since it is my alternative DPS spec, I thought it would be useful to share a couple of BiS lists.

In every BiS list, engineering and jewelcrafting as professions are included since they give the most DPS gain out of all professions.
As for food, Hearty Rhino should be consumed. Horde (Everything except Orc) 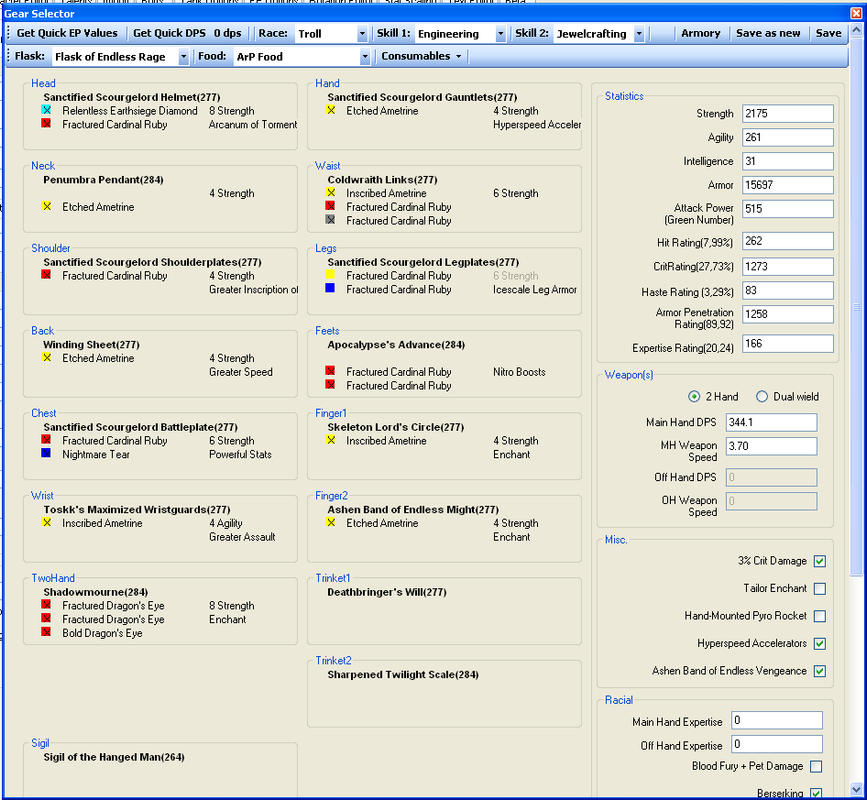 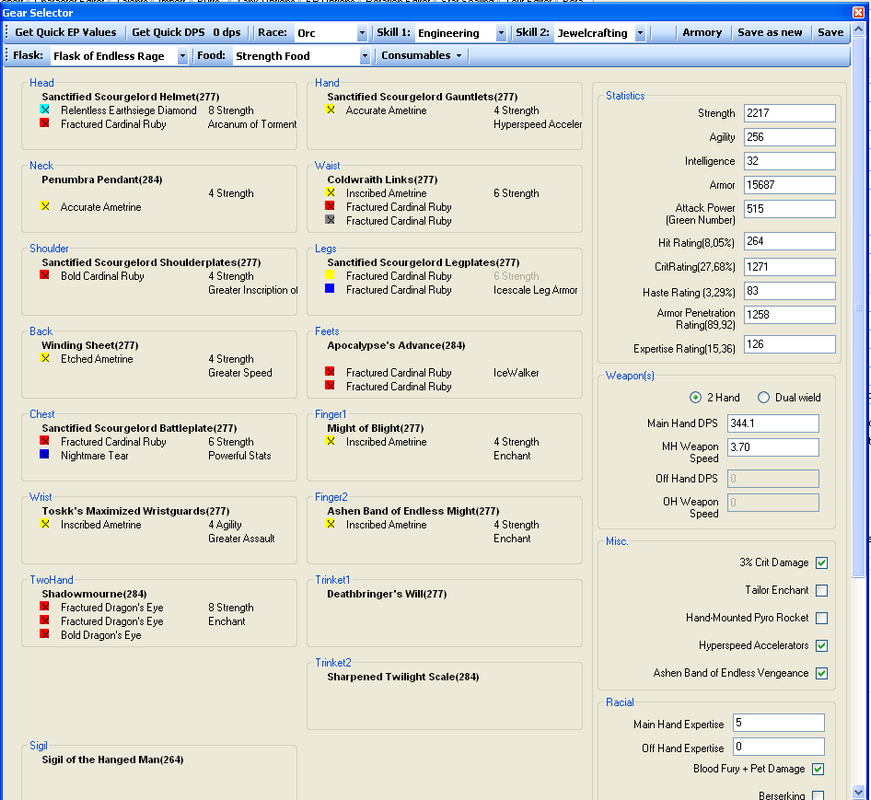 A slight change I'd suggest is using Sigil of Virulence over Sigil of the Hanged Man on movement heavy fights or even tank+spank ones if you run with latency over 200ms.

Of course, sigils should change if you're having the mentioned issues. These BiS lists are generated under perfect conditions that excluded latency issues.

This is slowly turning into a Guide instead of a BiS List thread, but if you're so interested, here it is Blood DPS Build Blacklustersoldier wrote:looking good, I'm actually going to change my dk to blood once I get bit more gear.. unholy is too fucked up in terms of pets and shit bugged... sad though

Currently the only major issue with Unholy is that pets don't receve the ICC bonus buff, which means is almost equal to Blood and Frost specs outside of ICC.

Not to mention the Unholy's usefulness in AoE fights, instantly applied percentage of damage taken on other targets, and about 200 DPS increase for Frost/Blood Death Knights as well as Shadow Priests.

I'd like to mention few things you can try but aren''t mentioned in the guide.

Do Horn of Winter before you get into combat, that way you'll have enough Runic Power for Dancing Rune Weapon as soon as you use all your runes.

Do Plague Strike as a starter instead of Icy Touch. (Unless you are experiencing some range issues)

Everytime you use Blood Tap, you should immediately cancel it. You don't want a Death Strike to consume it.
Top

Horde (any other race except orc)

Crown, you might want to re-run the Blood BiS set sim with the RS 25hc wrists instead of Toskk hc, I do believe that would result in a higher dps output.
Truewow: Retired for now.
Peace - Lvl: 80 Paladin

Already tried that, but for jewelcrafting/engineering specific build Toskk is a winner.

This is BiS list with Umbrage Armbands (Alliance version)

[/hide]
And these are the DPS results:

Hey crown, what program is that?
Looks like rawr, but a bit more streamlined.
Top

GuidoSalducci wrote:Hey crown, what program is that?
Looks like rawr, but a bit more streamlined.

Since postimg.org (the links Crown aka me used) aren't appearing because postimg changed their domain from postimg.org to postimg.cc

(Forum moderators) please change the original links in original post to a valid postimg domain like this
1) Alliance (All races) http://s9.postimg.cc/wdutv9nz3/Alliance_Bi_S.png (Clickable link)