Guide on fighting in Wintergrasp

Guide on fighting in Wintergrasp

I decided to write this guide after getting extreme levels of cancer cells from watching clueless people do random things during wintergrasp battles. I'm going to go over things shortly to best of my knowledge, I hope it'll be helpful to at least some people. I'll start off by explaining some very simple terms.

Fortress: This is the MAIN base, the place that attackers need to get into.
Workshop: You create vehicles in these. I'll go into details about vehicles later on.
Tower: These towers are the objectives of the defensive team. The towers must be destroyed by the wintergrasp defenders. There are 3 towers in the southern half of the map. Destroying the towers grants you a %5 damage buff per tower, and cuts off 10 minutes of time from the attackers, making everything harder for them to achieve. As a result, the attackers must defend the towers while attacking the fortress.

There are three vehicles.

Catapult: This is mainly for the lower geared people to dish out AoE damage during teamfights from far ahead. It's considered entirely useless for siege purposes and in my personal opinion, it should be avoided from usage. While it's true that the catapult is faster than other vehicles, it's also much easier to destroy and deals much less damage. I think other vehicles are simply much better. The catapult can throw a plague barrel and breathe fire in a cone infront of the vehicle. They both deal small damage, and only the barrel does minimal damage to buildings. Fire will only damage living targets.

Demolisher: This is the demolisher we all know from SotA. It's good for the defending team to destroy towers as all it's perks can be piloted by one player alone. It's harder to kill compared to the catapult, it has the rock boulder and ram spells, and it can carry two other people to perform ranged actions or spells. It also obviously hits harder than the catapult, and both abilities deal siege damage.

Siege engine: This is the most iconic vehicle of the game. It's a three seat vehicle plus a mountable cannon ontop. This is the toughest vehicle AND it hits the hardest, however it's fairly slow- making it vulnerable if not protected by allied players. The driver can ram the things ahead and the cannon shoots for about 5k damage and it also shoots very fast. I believe this is the best vehicle no matter what, and it SHOULD be used if you're at least 2. Once again like the demolisher, both abilities damage buildings and players.

First thing to do when beginning the battle is to get to rank 2 IMMEDIATELY- unless you don't intend to spawn any vehicles.

Attacking team: The objective is simple, break the gate to VoA and win. But how? As stated above, you must first get to rank 2. With your team, you must choose one of the southern workshops and capture it. Then, you must move to the northern workshop on that side after spawning 4 siege engines. When you capture the second workshop, spawn as many siege engines as possible and fill all of their mounted cannons. Next point is to attack the fortress. Have your low geared players get in the cannons for obvious reasons. Approach the fortress WHILE protecting the engines. Make your ranged dps kill the cannons, and then break down the WALL. After the first wall is down, make the engines wait BEHIND COVER. Make your team clear the first stage of the courtyard and destroy the tier 2 cannons inside the fortress. Once those two cannons are also down, bring in the engines and ram the second wall. Afterwards, drive your engines SLIGHTLY to the back but not behind cover. Clear the center courtyard. Once the courtyard is clear, have all of your engines go up to the VoA gate and ram it down. After it's down, approach and right click the big yellow orb, and you win. Note that while doing all these, you must also have a few people defending your towers in the south. Or you will lose about half of your time.

Defending team: Start off by capturing the first two workshops to the north. Afterwards, attempt to capture the other two workshops, but that's not essential. Have some of your players form demolishers or siege engines and break the southern towers. After the towers are down, you can

Defensive strategy isn't complicated. It's general idea is to prevent the enemy from doing what they are doing, while trying to destroy the towers. That's all.

General tips and tricks for everybody
1) First and foremost, I want to express the importance of teamwork. Without working as a team, you can do absolutely nothing in wintergrasp. This requires more teamwork than anything else in the game, and you can NOT carry wintergrasp on your own. You need full commitment from (almost) everybody in the team at that time, no matter how stupid or how low geared.
2) Attacking team should begin the battle at a workshop so that they may kill NPC's for some quick ranks.
3) Defending team should begin the battle at a tower for the same reason above.
4) Don't 1v1 someone that has tenacity unless you really know what you're doing.
5) When attacking in a direction with vehicles and players, have your melees stand ahead of the engines and make the engines stay back. This provides protection for the engines and this allows engines to simply kill everybody by doing massive AoE damage.
6) If possible, LEAD YOUR TEAM. Because when things are organized, they are more likely to succeed. If you think you're good at strategy and you understand how the battle works, simply ask for assist/lead and start spamming raid warnings to make people work with you. While leading is extra fun and productive at times, you're likely to meet retards that will keep telling you to stfu and stuff. Ignore them. In fact, continue the battle as if they don't exist, because they are more likely to be retarded compared to the average truewow player.
7) While attacking, if your team is well organized you should split into two equally strong groups and attack from two fronts instead of one. This will most likely cause the enemy team to divide and make stupid mistakes that might cost them the whole battle.
8) Know the map well. Learn what NORTH, SOUTH, EAST, WEST means.
Map for you: 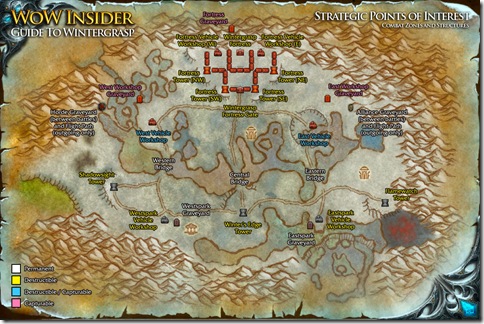 I don't claim to be the best at this or anything, and I don't promise that these are the best information available. This is just how I see things and so far they seemed to work for me. I hope this helps some people out there. Before the end, one last thing.

FOR NOW, AVOID FUCKING BROKEN TEMPLE, IT'S BUGGED. YOU CAN NOT MAKE VEHICLES OR RESURRECT IN IT'S GRAVEYARD.

Re: Guide on fighting in Wintergrasp

Wilcox wrote:FOR NOW, AVOID FUCKING BROKEN TEMPLE, IT'S BUGGED. YOU CAN NOT MAKE VEHICLES OR RESURRECT IN IT'S GRAVEYARD.